Guide with the BEST to visit FIRA SANTORINI this 2020 with excursions and accommodation in which to sleep.

Cheap and cheap accommodation to sleep in FIRA Santorini

Double or Twin Room from 29 EUR

Double or Twin Room from 45 EUR

Double or Twin Room from 54 EUR

Guide to Fira, the capital of Santorini

Fira is the capital of Santorini, and is the most important of all the villages of the island. It is in the west side of the island and 10 km from the main port, Athinios.

It has a population of about 1.600 inhabitants se It is located on the edge of a cliff, at a height of 260 meters and offers a great panoramic view of the volcano submerged.

In 1956, the island of Santorini was hit by an earthquake that destroyed much of the island. A part of the city of Fira was destroyed, but luckily, some of the buildings from the XNUMXth century were saved.

The city of Fira is a typical town of the Cyclades islands made of charming white houses with blue windows and doors, separated from each other by the small cobbled streets. Many of its beautiful buildings were built at the time of the Venetian invasion, including some blue-domed churches and sun-drenched terraces They offer an incredible view of the volcano and the sunset.

To this day, Fira is a busy city. During the summer and in its High season, the streets of the center are overcrowded and full of all kinds of shops, jewelry stores, restaurants, cafes, bars and nightclubs. Despite all the concentrated tourist traffic in the city, many areas are always quiet. One can find places to relax and enjoy magnificent views of the island and its surroundings.

For those in search of a better knowledge of the culture of the island, a visit to the Archaeological Museum in the old Minoan settlement of Akrotiri. The city also has numerous churches and monasteries, such as Agios Minas, Hypapandi Cathedral, Christ Cathedral, Panagia ton Dominikanidon Monastery, Panagia tou Rodariou and the Catholic Cathedral.

Also found in Fira is the Megaron Gyzi museum which has a fascinating collection of photos of Fira before and after the 1956 earthquake. Fira it also has a port which was, for many years, the main port of Santorini, today this port is only used for cruise ships. From there, boats can take visitors on a tour of the Nea Kameni volcano and Palia.

The weather in Fira Santorini

Do not forget, by the way, that from the 2018 you have to pay tourist tax for sleeping in Greece. The fee varies between 0,5 € and 4 € per day depending on the category of the hotel or accommodation you have chosen to sleep.

What to do in Fira (Thira)

The excursion to the volcano and bathing in the hot springs: the Santorini volcano is formed by two small islands (Palea Kameni and Nea Kameni) of black lava located in the center of the Santorini basin and are, geographically, the youngest islets existing in the Eastern Mediterranean.

Palea Kameni is about 2000 years old, while Nea Kameni is not over 500 years old. La Caldera offers an incredible spectacle of the villages located on the high cliffs, especially at sunset.

You can visit the volcano by boats that go daily. One can walk the black solid lava walls of the volcano and discover the volcano's crater and other rupture openings with sulfur vapor. In this area you can bathe since the waters are thermal.

What is there to see in Fira (Thira)?

La Orthodox Metropolitan Cathedral it is located towards the lower part of the city and can be seen from many points of the island. It has a patio and an impressive bell tower. The curves of the arches are reflected in the design of the dome. It has a mosaic on the outside of the cathedral, although it only dates from 1975. The cathedral dates from the 1956th century, but it was rebuilt after the XNUMX earthquake, so it can be said that it is quite modern.

La Catholic cathedral it is in great contrast to its Byzantine neighbors. The clock tower stands out, wonderfully adorned in which the bells are also. The interior is decorated with large portraits of religious framed with pilasters. The interior dome is made up of bluish lilac and orange and cream colors. Don't forget to take a look at the confessional on the door. The cathedral has been restored and inaugurated in 1975 after suffering the earthquake in the XNUMXs.

El Dominican convent It is located in the predominantly Catholic neighborhood of Fira and is home to twelve nuns who come from twelve different countries. It is not that difficult to locate the Dominican Convent, as it is located in the center of the city. It is a convent highly revered by people who belong to the Christian faith. Inside the convent, there is a church that shines with its wonderful traditional Santorini architecture. There is a street that winds through the Convent and if you are lucky you can hear the nuns singing Vespers.

El Museum of Prehistory Thera is situated in Fira and the results of prehistoric times that have been excavated from Akrotiri, ancient Thera and other areas of Santorini are on display. Exhibits include pottery, marble statues, the Minoan frescoes from Akrotiri, tools, and weapons.

Megaron Gyzi It is where the Santorini Cyltural Center is located. Exhibits include old maps, prints, old photos of Santorini, and a library with rare editions. In summer, many cultural events are hosted there.

El Archaeological Museum Santorini is located in Fira, the capital of the island. It houses sculptures, ceramics, statues, small vases and the findings of the ancient cemetery of Thera. The display may not be as impressive as the exhibits in the Prehistoric Museum, but it is worth a visit.

El Belloni Cultural Centeror it is located in a beautiful building located in Fira. It houses a library with rare editions from the XNUMXth and XNUMXth centuries and frequently organizes art exhibitions, lectures, music concerts, theater performances and other events.

El Folklore Museum Santorini is located in Kontohori, a suburb of Fira on the way to Oia. This museum is a private initiative of Mr. Emanouel Lignos and is located in a typical cave house from 1861. The museum includes an underground cellar with a wine press, workshops for traditional crafts, a gallery and a small chapel dedicated to Agios Konstantinos.

Other places where you can stay in Santorini 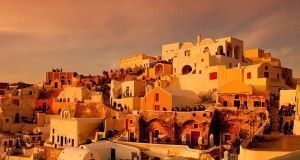 Fira (Thira): the beautiful capital of the island of Santorini 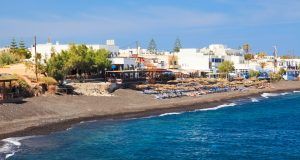 Kamari: family tourism where to enjoy the holidays Oia (Ia): the town of Santorini with the best sunset ...